Dyes Can Double the Efficiency of Solar Cells 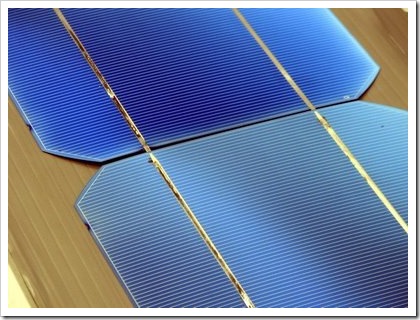 A simple sheet of glass coated with dye could be enough to cut the costs of solar power. That’s the claim from researchers who have created a ‘solar concentrator’ that harvests photons and funnels them into photovoltaic devices. The device allows relatively small solar cells to harness rays from a much larger area.
Mirrors that track the Sun are already used to deliver extra light onto solar panels and maximize their electricity output. But these mirrors can be costly to deploy and maintain, and the solar cell is prone to overheating. In the 1970s, scientists tried to develop alternatives that used light-absorbing dyes.
The alternative
But the research stalled because many of the dyes were unstable in sunlight, or because the photons did not get very far through the plastic before being reabsorbed.
Researchers led by Marc Baldo at the Massachusetts Institute of Technology in Cambridge have now come up with an alternative that uses a mixture of dye molecules in a thin film coated onto glass.
Each dye absorbs light of a different wavelength to make the most of sunlight spectrum.
By fine-tuning the dye mixture and adding an extra compound, controls the re-emission process ensures most of the photons get trapped inside the glass.
The team thinks they can boost the power efficiency of a cadmium telluride cell from 9.6 per cent to 11.9 per cent, and a CIGS cell (copper-indium-gallium-selenide) from 13.1 per cent to 14.5 percent. The research is published in the journal Science.
Baldo thinks that the efficiency can still be vastly improved. “We could ultimately double the efficiency of 90 percent of solar cells used today,” he predicts.
Solar cells are very sensitive to defects in the material, but that does not apply for these thin films, says Baldo. That means it could help solar cells to produce electricity at a mere $1 per watt, which is essential if the solar industry is to be economically sustainable.
Lawrence Gasman, principal analyst at NanoMarkets of Glen Allen in Virginia, is impressed that Baldo’s system seems to be so easy to manufacture, and says that commercial interest in innovations such as these are blooming.
But dye-based systems still face stiff competition from conventional concentrators.
In May, IBM claimed to have used mirrors to concentrate 230 watts of the Sun’s power onto 1 square centimetre of solar cell. This is a much higher concentration than Baldo’s dyes can achieve.