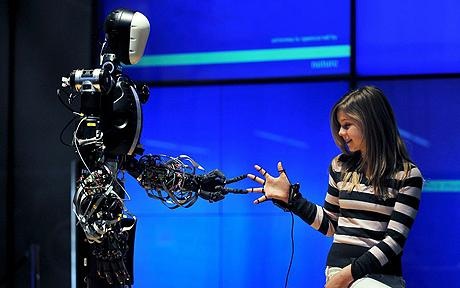 This robot at the centre of the development of artificial intelligence has the ability to play the child's game of rock, paper, scissors. Developers hope Berti (Bristol Elumotion Robotic Torso 1) and other robots could eventually be used in the likes of land mine clearance.

The robot, created by Bath robotics firm, Elumotion and on show in London, is designed to mimic human gestures. A spokesman said such robots could also be used in prosthetic limb development. He said this would possibly help people who had been in car accidents. "They could also carry out extremely dangerous jobs such as land mine clearance," he said. Visitors to the Science Museum in London's South Kensington will see Berti give a short speech, using a computer-generated voice, as well as making hand gestures. Craig Fletcher of Elumotion said Berti cost around £200,000 to build. He said: "Berti was certainly a challenge to build. To mimic human gestures a robot must be both lightweight and powerful.".