Weld Symbols on a Drawing – Refresh Your Knowledge - ANSI/AWS A2.4-79 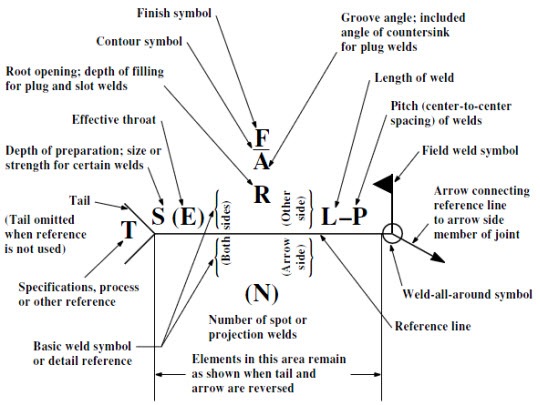 The eight elements which may appear in a welding symbol are:- reference line, arrow, basic weld symbols, dimensions and other data, supplementary symbols, finish symbols, tail and specification and process or other reference. Let us discuss the one by one. 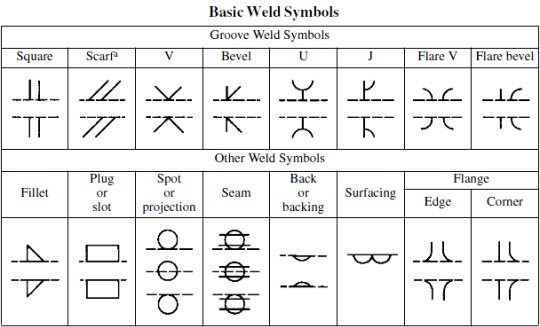 Supplementary Symbols: These convey additional information relative to the extent of the welding, where the welding is to be performed, and the contour of the weld bead. The “weld-all-around” and “field” symbols are placed at the end of the reference line at the base of the arrow as shown in first figure and the table Supplementary Weld Symbols.

Dimensions: These include the size, length, spacing, etc., of the weld or welds. The size of the weld is given to the left of the basic weld symbol and the length to the right. If the length is followed by a dash and another number, this number indicates the center-to-center spacing of intermittent welds. Other pertinent information such as groove angles, included angle of countersink for plug welds and the designation of the number of spot or projection welds are also located above or below the weld symbol. The number designating the number of spot or projection welds is always enclosed in parentheses.
Contour and Finish Symbols: The contour symbol is placed above or below the weld symbol. The finish symbol always appears above or below the contour symbol. The following finish symbols indicate the method, not the degrees of finish: C—chipping; G—grinding; M—machining; R—rolling; and H—hammering.