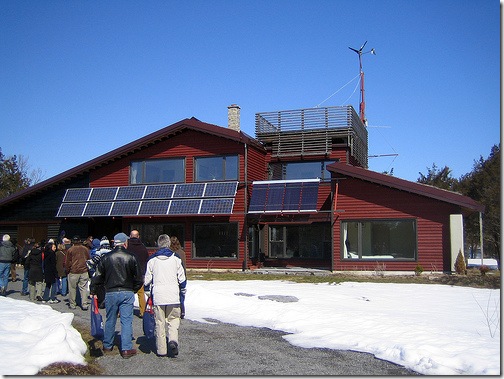 Windows could be used as powerful solar panels thanks to a new technology that concentrates the sun's rays. The technique uses transparent dyes to capture, concentrate and redirect light along the surface of the glass to photovoltaic cells in the frame, which convert the light into electricity. The breakthrough means there is a tenfold increase in power output compared with use of the PV cell alone.

The team from the Massachusetts Institute of Technology (MIT) claims the technology could slash the cost of generating electricity from sunlight, making it more competitive with standard grid power. This is because the expensive PV cells only need to be installed at the sides of the panels, rather than across the whole surface.

Sunlight is concentrated in existing solar power devices using large mobile mirrors that track the sun as it moves across the sky. But these can be expensive to deploy and maintain.

In the MIT device, called an "organic solar concentrator" and described in the latest issue of the journal Science, the researchers painted a mixture of organic dyes onto the surface of a pane of glass. The dyes trap different wavelengths of sunlight and then guide the energy towards the PV cells at the edges.

"The point of all this is to get away with using far fewer solar cells," said Marc Baldo, an electrical engineer at MIT. "The concentrator collects light over its whole front surface, but the solar cells need only cover the area of the edges." As the edges of a glass panel can often be 100 times smaller in area than the surface itself, he added, solar panels would need 100 times fewer PV cells to collect the same energy. "So we can save money. Since industry can't produce enough solar cells to satisfy demand, this might also be a good way to stretch production."

As well as windows, the technique can be applied to standard solar panels on roofs and walls to improve their efficiency. "We think the technology should cost less than $1 (50p) per watt [to build]", said Baldo. The MIT device is relatively simple to manufacture and researchers claim it could be commercially available within three years.

Martyn Berry, senior research and development engineer at solar-energy company Solarcentury, said the biggest challenge for PV technology was to make it competitive with standard electricity.