This is JCB’s Dieselmax owns the record of world’s fastest diesel car with 350.092 mph / 563.41 kph. The previous diesel land speed record is 236mph (380km/h), set in August 1973. The Dieselmax car is powered by two turbo-charged JCB engines built at the company's plant at Rocester. 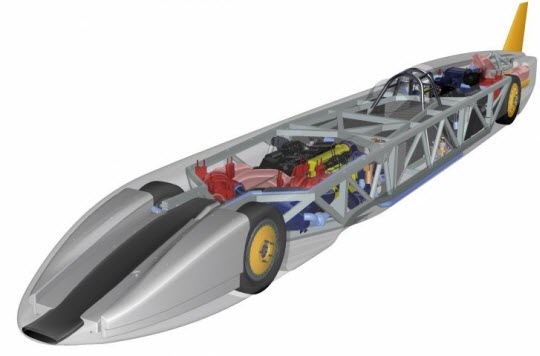 Dieselmax is also the first car designed entirely by computer. To facilitate visualization of the overall car, Piper's team generated a highly detailed 2D electronic computer model of the car, revealing all of its components to help to identify the fit and practicality of each in relation to the others. A full-size mock-up was then built for final verification of all aspects of the concept before work started on the real car. 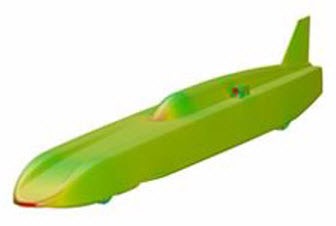 The Dieselmax's bodywork was designed by Ron Ayers, who shaped both the Bloodhound missile and Thrust SSC. The body is of carbon fibre, covering a square-tube space frame chassis.'The shape is long and low,' Leverton explains, 'but not as thin as we'd like because it's driven by the integration of the chassis and the engine. The under floor shape is critical because we want neutral lift and no down force. There are no radiators because they generate drag.' (Hence the ice-cooling.) 'The ride height is critical, as is the shape of the inner wheel arches at the front,' adds Leverton, pointing out that there will be salt spray at Bonneville, making clever wheel arch aerodynamics vital to divert the front wheels' spray away from the rear wheels to maximize traction on the powdery surface.

Two six-speed bespoke gearboxes are employed, one for each engine. The gearbox is mated to the engine using a JCB designed stepper gearbox arrangement utilizing oil-immersed multi-plate clutch packs from JCB's flagship 3CX Backhoe Loader. A torque tube encloses the gearbox and connects the final drive to the rest of the driveline. Gear shifting in both boxes is synchronized and controlled electronically with shift actuation via steering wheel-mounted paddle switches. Traction control will not be used, not just because it is outlawed by SCTA-BNI regulations but also because the aim all along has been to keep the car as simple as possible and the low Mu factor (coefficient of grip) of the salt will preclude very hard acceleration, which might induce wheel spin.

Suspension:- Independent all round via twin wishbones, coil springs and hydraulic dampers